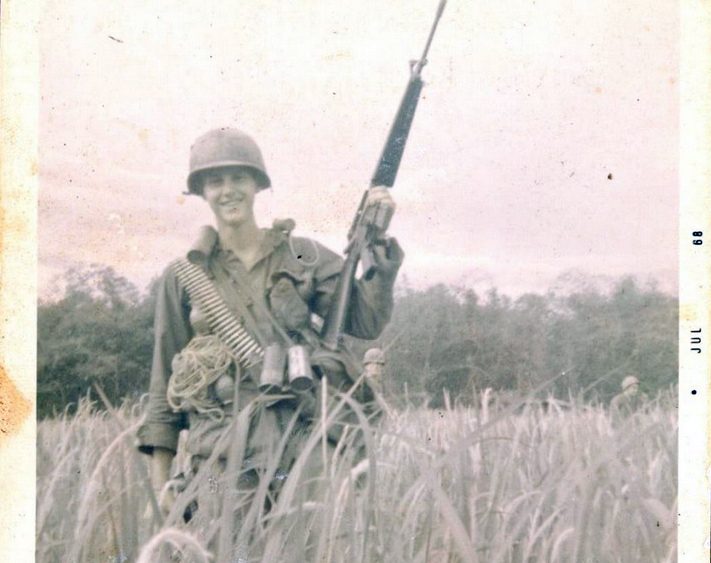 “I was one of those kids who knew from the age of 6 years old what I wanted to be,” and that was a herpetologist. He had also always assumed that at some point in his life he would be a soldier.

Those two things came together when he served as a squad leader, then platoon sergeant, then platoon leader in B Company, 2nd Battalion, 35th Infantry, 3rd Brigade, Fourth Infantry Division. He joined the unit at Duc Pho, in the southern end of I Corps, in October 1967.

The young buck sergeant – he had turned 21 on the flight over (“My birthday lasted 15 minutes” on account of the International Dateline) – immediately found that jungle combat afforded him with many opportunities to indulge his passion. Without trying hard, he found 25-30 different snake species.

Whenever someone saw a snake they would call him on the radio. “If I was within a couple of hundred meters, I’d go try to catch it, pinning the head down with the butt of my rifle.” On one of his first patrols, just after his arrival in the field, he found a cobra coiled up under a piece of thatch while looking for Viet Cong tunnels. He tried to catch it, but it got away into a bamboo thicket. When he looked up, the “old timers” were staring at him “like I had four heads. They were obviously thinking ‘We have to follow THIS guy?’”

But Knight did a lot more during his tour besides catching snakes. He has loads of stories to tell, and he’ll be telling some of them at the South Carolina Confederate Relic Room and Military Museum (an ADCO client) at noon on Friday, Jan. 26. He’s the featured speaker for the museum’s monthly Lunch and Learn series. The public is invited, and admission is free.

James Knight was born in 1946 in Frederick, Okla., but grew up in central Kansas, where he enlisted in the Army in 1965. After Basic Training at Ft. Leonard Wood, Mo., and Advanced Individual Training at Ft. Jackson, S.C., he was stationed for 17 months in Germany before being sent to Vietnam.

“You can’t stick a person in a place like that, and not expect it to be a character-building experience,” he says now. “Everything I am today – mentally, morally, physically and spiritually – I owe to Vietnam.”

“For a kid who grew up in Kansas,” or anywhere in the temperate United States, “Everything was different. It was always either warm wet or warm dry, the language was not friendly to the ear, and everybody was trying to shoot everybody else.”

A few months into his tour, his unit had started moving north, getting as far as just south of Danang. He spent the 1968 Tet Offensive in and around the Hep Duc Valley, Que Son Valley, and Antenna Valley. He came down with malaria at the end of Tet and spent about six weeks in the hospital before rejoining his unit, which was by then in the Central Highlands where Vietnam, Laos, and Cambodia come together. He finished out his tour down in 2nd Corps, near Ban-Me-Thuot.

Knight spent 24 working years as Curator of Natural History and Director of Collections at the South Carolina State Museum. He retired in 2010 and continues his natural history research in retirement.