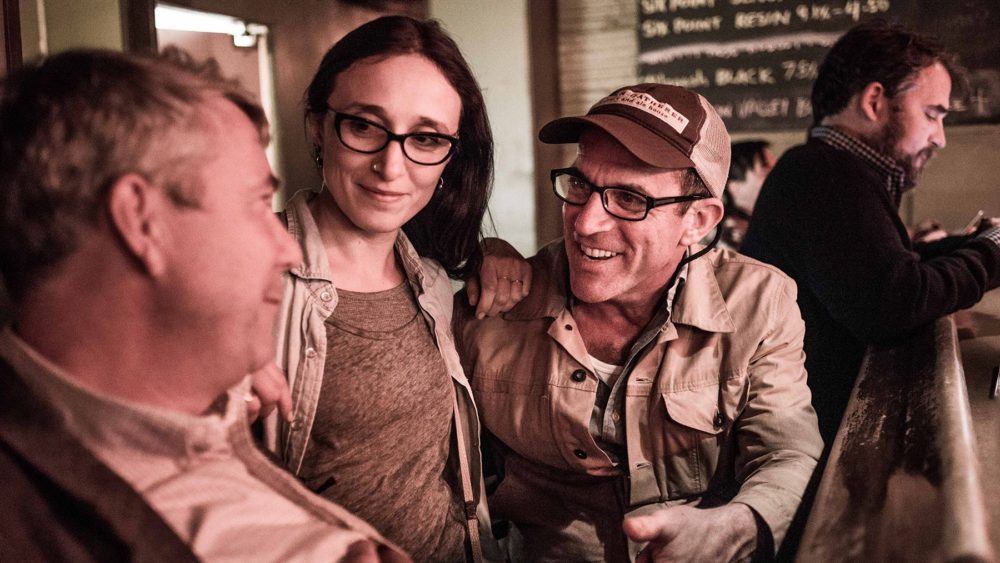 Jeremy Borden brings to our attention a piece he wrote for a site called The Bitter Southerner. It’s about the role The Whig, “North America’s Greatest Dive Bar played in helping get the Confederate flag down.

Basically, the role is this: It was a gathering place — and a fertile one — for the folks who planned the two anti-flag rallies last summer. That would be Mariangeles Borghini, Emile DeFelice and Tom Hall, pictured above in a photo by Sean Rayford.

That was a natural part to play for a bar located just yards away from the Confederate soldier monument. And this piece was a natural fit for The Bitter Southerner, which apparently has its roots in its creator’s bitterness about Southern bartenders not getting enough respect. No, really.

It’s a piece with a strong sense of place, and that place is the very heart of our community. You may recall that, just as getting rid of the flag was, for The Whig, about “Neighbors… cleaning up their trashy yard,” Emile saw the banner as bad for his own business, Soda City. As our own Brad Warthen wrote about Emile in June:

He fantasizes about getting a bunch of Confederate flags, some poles and a few bags of cement, and driving them in a truck to the places of business of some of these lawmakers — their law offices, their insurance agencies and so forth — and planting the flags in front of their businesses and seeing how they like it…

Anyway, you should go read the piece. Excerpts:

At The Whig, they planned protests they hoped would pressure the state’s leaders to bring down the flag they viewed as as plague on the statehouse grounds. But their plans had been made with some trepidation.

“Do we go for this now while these people are not even cold dead?” Hall asked. “And we all said yeah. Yeah, I’m grieving I don’t know them; I’ve never been to that church. But that (the Confederate flag) was his (the killer’s) Army, that was his uniform. We’re not waiting and not sitting back.”

As Borghini put it, “Why would they not do something about it?”…

And about The Whig:

Whig denizens don’t like the word “hipster,” and they’re probably right that the self-righteousness implied doesn’t fit — even if the bar’s detractors detect a whiff of it. The Whig is one of only a few eclectic gathering places in what many complain is Columbia’s often banal college-town existence wrapped in a family and church town’s restrained conservatism.

The bar differs from its stiffer neighbors in more ways than one. The statehouse politics steps away are usually divisive, ugly and superficial. But even many of those bow-tied politicians and operatives sidle up to The Whig’s bar, where the conversation is generally more elevated and congenial….

Phil Blair, the bar’s co-owner who runs it day-to-day, calls it “alcohol philanthropy.” He wants to do more than sling beer and burgers. “I’m from here,” Blair said. “I have that local chip on my shoulder that we’re trying to catch up to other cities around us.”

The Confederate flag on the bar’s front perch was yet another reminder for Blair and others that Columbia hadn’t yet entered the 21st Century.

Those who inhabit The Whig are usually passionate people who rail against the status quo from the sidelines….

Again, you should just go read the full piece…

And if you’d like to recapture the feel of the first of the rallies these folks organized, take another look at this short film created by Matt Warthen, with Brad doing the voiceover…