Blog
ADCO / Media / @ViewingHistory: Images we may have missed at the time
Dec 31

@ViewingHistory: Images we may have missed at the time

Just started following a brand-new Twitter feed, @ViewingHistory. It’s less than a day old, and only has eight Tweets so far. But we like what we see.

The above picture is captioned, “Soviet paratrooper over Leningrad (Date Unknown).” It seems appropriate that this photo be accompanied by the Soviet national anthem, which is quite stirring (didn’t you get chills when the crew on the sub sang it in “Hunt for Red October”).

Then, for view at another old adversary, see the below image, captioned, “German soldier applying a dressing to wounded Russian civilian, 1941.”

Did you know Germans ever treated Russians like that during that war? Of course, it stands to reason — people are people, and decency will be found in the unlikeliest places. Perhaps you will find the image comforting, in that it renews some faith in humanity… 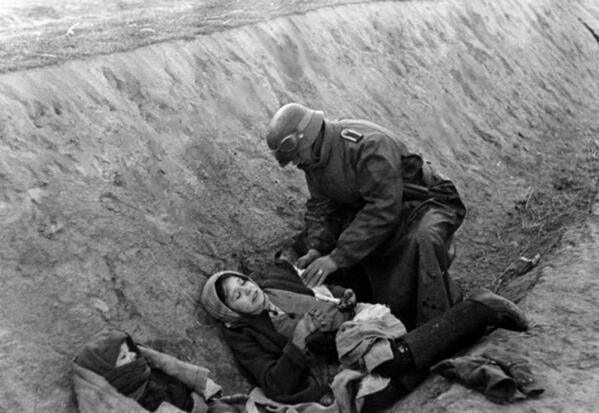